Too posh to push?

As April is C section awareness month, I thought it would be the perfect time to share my experiences of C section. This can be a very emotive subject as opinions can greatly differ. This is my experience and my opinion of it. I get very descriptive in this blog so this is your warning to go away now. Still here? Ok then.

The easy way out?

When I found out I was pregnant with my first son I went through the whole range of emotions from excitement and joy of the news to intrepidation about the birth. I’m sure every pregnant woman has thought about how she will manage with labour and birth and exactly how she would like that experience to happen. Me? I had it all planned in my head. Minimal intervention, water birth preferably and I was looking into hypnobirthing. That wonderful plan was shattered by 20 weeks when the ultrasound showed a low lying placenta. I was given some hope that the placenta can move but now the delivery method was uncertain. I still hoped for a natural delivery and waited for the repeat scan. As I was reluctant to have a C section they did give me until 34 weeks for the placenta to move. It had not moved at all and the consultant told me I needed to put my mind to having the C section. I came to terms with it pretty quickly and in some ways it was nice knowing which day my baby would be born and what exactly was going to happen. I made peace with it and got on with it.

On September 7th 2012 at 1.30pm I was taken to theatre. I was so scared. I saw a colleague from the hospital I work at and was so relieved to see a friendly face I cried in her arms and she held my hand while the anaesthetist attempted with difficulty to insert the spinal needle. He was getting quite impatient with me but how could I possibly bend over any further my stomach was full of baby! On the 4th attempt it was in and the spinal anaesthetic was administered. You will never experience anything as weird as being awake while you have your guts cut open and people diving into your belly to pull your baby out. You can feel every single tug and pull, not as a pain but as a pressure. Don’t think about it too much or you will feel queasy! Now I have seen C sections on TV, heck I have even seen one in real life during my training so I was not expecting what happened next. The sense of urgency in the surgeons voice was clear ‘you need to push from the top’. Push? Me? That’s not how C sections go! As it turns out she was talking to the anaesthetist. Baby was a tad reluctant to come out through the sunroof. After god knows how many heavy pushes on my bump, he’s out I heard them say. All quiet. Where is the crying? I was terrified…and then it came. The relief. I tell you there is nothing like the first time your baby cries. This one didn’t stop for about 6 months but that’s another story.

I had a tough few days in hospital because I had lost a lot of blood but overall I recovered really well and without any complications. I decided that I never ever wanted to go through a C section again though. Awful experience.

It’s funny how things are sent to challenge us.

I was thrilled to be pregnant with my second baby but from the start I felt scared that I would have a low placenta again. Excellent news with the 20 week scan the placenta was in the right place and I was given the go ahead for a VBAC (vaginal birth after cesarian). I attended the VBAC clinic for a discussion around my options. I was offered VBAC with or without induction or a planned C section. The specialist midwife was fantastic at explaining all my options to me including risk factors. She was supportive that it was my choice. Now then, as you know I never ever wanted another C section. However looking at all my options and also taking into account other factors, for example I was due 14th December. They would not induce until 21st December at the earliest. I had 3 other children to think about because as well as my son we also had my partner’s children for Christmas day. I really didn’t want to spoil Christmas for them by being in hospital. My decision was made. Aim for VBAC without induction but if the baby hadn’t arrived by 21st December an elective C section was scheduled.

December 20th 2017, I had my final consultant appointment. I had tried all manner of things to get the baby moving. Walking, hoovering, bouncing on the ball, pelvic tilts, pineapple, hot curry, sex basically anything that Google threw at me. The hospital policy was to wait until 7 days overdue before sweeping the membranes but I was still so desperate to avoid the C section I persuaded him to do it a day early. Boy was that a fecking ordeal! I don’t know how it’s meant to go but I’m pretty sure that was not it! I almost passed out before getting to the hospital exit. I had to be taken to the A and E to be monitored. They diagnosed cervical shock as a result of the sweep. The rest of the day was awful. Pretty sure I was in labour. I was bleeding a bit too after the sweep and the maternity ward reassured me that could be normal. I woke at 6 the next morning with pain and passing more blood and clots. I was terrified. We called it in and were told to go directly to the ward. I was looked after by an amazing midwife (who I had actually worked with in the ICU before she trained as a midwife). I was absolutely on the verge of a massive panic attack by now. She kept me so calm. They reassured me that although there was bleeding it wasn’t an emergency and they would proceed with the scheduled afternoon list.

At December 21st 2017 at 3pm I was taken down to the theatre. My partner was with me through the whole process and held my hand and reassured me the whole time. Thank God he was there! I was petrified. I thought I was going to die. I explained to the anaesthetist the difficulty with the spinal previously and he reassured me it would be ok. He was amazing. It went in with minimal fuss on the first try. I was so grateful I could have cried. I think I did a bit actually. He must have seen how scared I was because he stayed chatting to me through the whole process, explaining to me what the surgeons were doing as they went along. Baby came out without any pushing or shoving and there was that beautiful cry! It seemed an age before I could hold him as they were a long time clearing up inside. It really does feel like someone doing the washing up in your stomach! Big placenta apparently. He was a much bigger baby too.

My recovery was a lot more eventful this time. I was in hospital for a few days as they thought I had an ileus (temporary loss of movement in the bowel). On December 24th I just had to get home. I had to do Christmas. I promised the consultant that I wouldn’t eat anything heavy until I had my bowels opened and she reluctantly agreed with the proviso that I returned immediately if there were any problems.

I don’t actually remember Christmas day in great detail. It was all a bit of a blur. I also can’t remember the order of complications as they happened but it took a few weeks for the bowels to sort themselves out properly. I was anaemic but I wouldn’t take the iron tablets as it would further complicate matters down that end. I had 2 seperate infections of my womb, I had a wound infection. I also was having very heavy bleeding still at about 6 weeks post partum which was linked to the wound infection. I had to be given tablets to stop the bleeding. What a bloody outing! It took me months to recover properly, something I was not expecting as I recovered so well the first time.

I often think about my experience but this is the first time I have written it down and I must say it’s been quite cathartic. I don’t think I appreciated actually how traumatic my second birth experience was for me. I’m sure it could be a contributing factor to my development of post natal depression and anxiety. I am done having children as we have 4 between us but I would never ever want another C section. I know many people will have positive stories about their C sections but to sum up my thoughts on the issue…I hated both of my experiences. It most certainly is not the easy way out. It is major surgery and let’s not forget my awful scar and overhang that I am now left with. Even though I kind of chose to have the C section on the second baby that still didn’t mean I really wanted it. I was just more scared of ending up having an emergency C section or serious complications from the VBAC. BIRTH IS BIRTH. No matter what the exit route is. The main aim is to deliver that baby safely and to keep the mother safe. 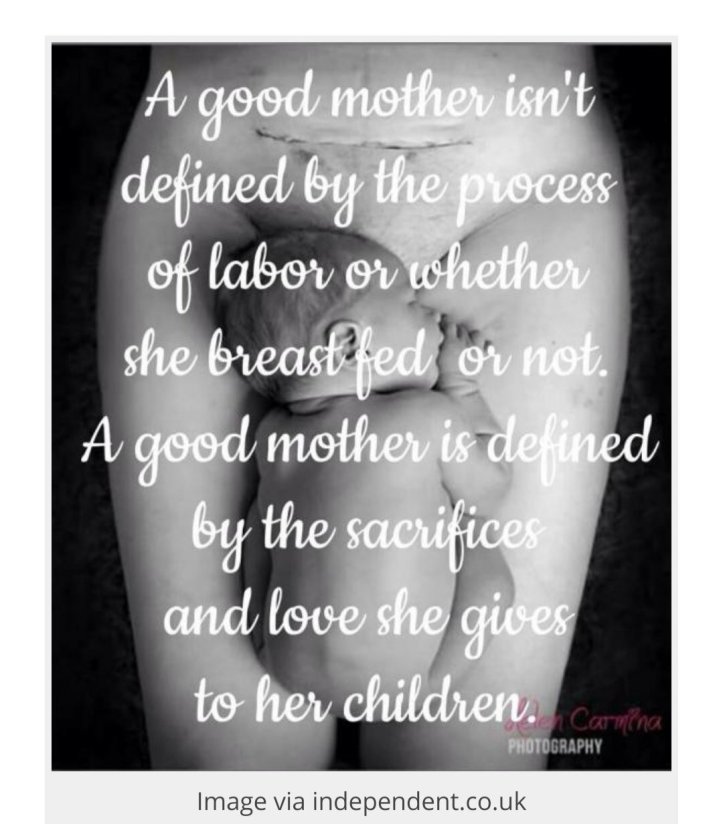