Hey Secret lifer’s we made it. It’s September and we have survived. Go us! All jokes aside we have had an amazing summer holiday and I’m really sad for it to end in one way although I am looking forward to getting some routine back in my life.

It can be so difficult in the holidays to find fun activities for the family and particularly for us with 4 kids age ranging from 1 year to 16 years. We were thrilled to be invited to try out the Treetops Adventure Golf at St Davids, Cardiff. This sounded like the perfect fun family activity. We were all excited to go and even managed to prise the gamer from his Xbox for a few hours!

The Mini golf course is situated on P3 of St Davids. Easily accessible by lift. On arrival we were greeted warmly by the staff who couldn’t be more helpful. They arranged a table for us with snacks while they explained what we needed to do. I am a mini-golf virgin but it’s dead straight forward.

There are 2 courses of 18 holes each. Each course had its own theme. Tropical trail and Ancient adventure. We started with the tropical trail. It was like stepping into another world it was so beautifully designed and decorated. It very rapidly became apparent that this was not one for my toddler who would was trying to trash the course already at hole 1 but thankfully he was happy to watch from the pushchair and there were no problems taking the pushchair around the course. He was loving looking at all the birds and animals and the sounds. (Not real ones). 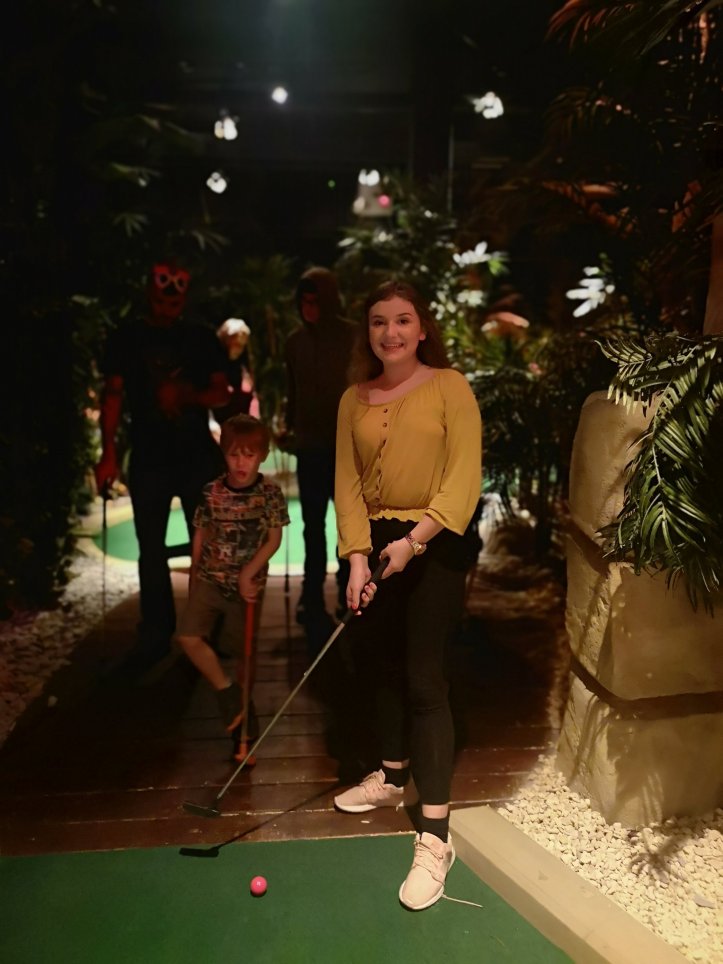 The Hubster started confidently with 2 hole in ones but I soon got the hang of it to make a comeback. Not that we are competitive haha. All the children were enjoying although me and the Mr were probably the biggest kids (as per usual). The highlight for my 6 year old was getting a hole in 1 on the 18th hole! He was chuffed.

Little tummies were hungry so we stopped for some pizza which was included. It was seriously so tasty although the smaller 2 boys weren’t keen. They prefer the 50p Aldi cheap pizza!?! Kids hey! No matter because I polished it off. They also had a big stack of chocolate fudge brownies on the countee cut up for anyone to take. Oh my days I am not joking they were THE BEST brownies I have ever tasted. Even if you don’t like golf you should go just for the brownies! I had to restrain myself from scooping the lot into my bag.

We then headed over to the Ancient explorer trail. Again it was just so pretty.

The holes on both courses differed in difficulty but were still manageable for my 6 year old. A less wild toddler would probably enjoy too but I would say from age 3 years up to enjoy on the course. It is still fun for younger children to watch from the buggy as it is so colourful and there is music. I’m not going to say who won (It wasn’t me) but it didn’t actually matter because we had such a good time anyway. The Hubster even managed to score at the 19th hole and won himself a free round for next time we go. It really was a great fun family activity. Perfect for rainy days too seeing as we live in Wales.

What have you guys been up to over the summer? Have you had fun? Let me know in the comments and don’t forget to subscribe.

Disclosure: this was a collaboration post with Treetops Adventure Golf. All the thoughts and opinions in the post are my own.